Well, it’s like I blinked and all of a sudden we are well on our way to the end of January! Where is the time going?! …it’s been almost two weeks since I shared with you my goals for January so I figure it’s time for a little update and also a chance to share what I’ve learnt!

Lesson No. 1 – Make Plans But Don’t Be Afraid To Switch Them Up
One of my goals for the month was to run three times a week in the lead up to the Winter Run 10km. By the time I’d posted my goals I’d already smashed that for week one and all the plans were in place for me to smash it again on week two. I was all set to head to Adidas Runners on the Monday evening when the tube strike was announced and quite frankly I did not want to get stuck in London Town when I had no other reason to be there. Then, as fate would have it, it decided to snow on Winter Run Club day and pretty much every single person signed up contacted me to let me know they wouldn’t be attending. Believe me, I know I could’ve still run as I was still at the venue at the time of Run Club but I chose not to. I did make it to parkrun as planned on the Saturday though which felt super tough but at the end of the day I got it done.

How was I supposed to resist – Run For Your Bun – a cafe where exercise is the currency ? = ? Helen and I swapped a few minutes of running, squatting, lunging, cycling, sit ups and rowing for a grilled chicken burger ? and a chance to spend our lunch break away from our desks …a novel way to highlight that the average office worker spends 90% of their working day sat down and not moving …can you relate?! How do you stay active during the working day?! #runforyourbun #keepitsimpElle #london #coventgarden #hbloggers #foodblogger #fitnessblogger #olympuspengeneration

My week ended up being full of indoor cycling and a little workout at the Run For Your Buns cafe!
As for week three, I’m on target for two runs but have also spent some time on the bike and even made it to a candlelit yoga session (which felt like a workout seen as I barely do yoga these days!).

Lesson No. 2 – You Choose Your Priorities
This one also kinda ties in with learning to say no, if I’m honest. It’s something I’ve banged on about a fair few times especially in relation to blogging itself and the opportunities that are presented. But this month I’ve realised that if I set myself a goal, if I want to achieve it, I need to make the steps towards that goal a priority. It’s only a month so surely I can make a few sacrifices; and quite frankly, are they even sacrifices if they are helping me to achieve a goal I’ve set for myself?!

Lesson No. 3 – Believe In Yourself
…then others will too! This one relates to both my indoor cycling goal and my running goal. As I get closer to race day, I seem to be losing confidence in myself to run this race under 60 minutes. I’m well aware that you can’t predict how you will feel or perform on any given day and that leaves me feeling just a little uneasy. At my Running School sessions, Nick and Joe suggested the best strategy to run the race would be negative splits (increasing pace for each kilometre); but I just wasn’t sure I could do it mentally. So I decided to try it out in Winter Run Club and programmed an out and back route for our week 12 session. Leaving at 630pm, we’d run as far as we could until the clock reached 7pm at which point we would turn around and aim to run back to our starting point faster than it’s taken us to reach the halfway mark. I felt like I pushed myself a little and tried to push even more as I got closer to the end of our distance but was a little disheartened when I uploaded my tomtom data which looked like I’d run as slow as ever. When the data uploaded to Strava though, it removed all the stationary time (from traffic lights) and it seemed I hadn’t run as bad as I thought I did and had in fact managed to pick up my pace for the second half of the run! …there is hope after all!

In terms of indoor cycling, I went away after the training with mixed feelings. I felt like I could give what was being asked however it’s really difficult to practice when you don’t have access to a indoor bike at your disposal anytime you wish. With a busy week, and limited studio access it mean I only got to practice my audition tracks about 10 minutes before the auditions started. It was a great experience to get to teach (for the first time ever) but I do realise that my confidence will come with more experience of teaching. Currently, I need to finish planning the rest of my session and practice it. My feedback / advice from other instructors is to not over complicate the routine as that makes you overthink it, to practice cueing the moves for those in the class and to know my music. Pretty sound advice if you ask me!

Lesson No. 4 – What You Wear Can Affect How You Feel
During the month, I’ve been treated with a new workout outfit every ten days and have been loving it. I’m use to kit that is 100% functional rather than being particularly fashionable but I opted for some pieces which looked like they would be both. Donning a new outfit even if it’s just a new sports bra or pair of leggings alone has literally made me feel like superwoman at some points! This month I loving blues, especially navy along with muted tones (grey, black) with pops of colour (like yellow), different textures (like mesh) or the monochrome look. My current favourites are this hooded mesh sweater, this black high neck sports bra (which is also now on sale!) and these black leggings all available from the women’s activewear range at Debenhams. 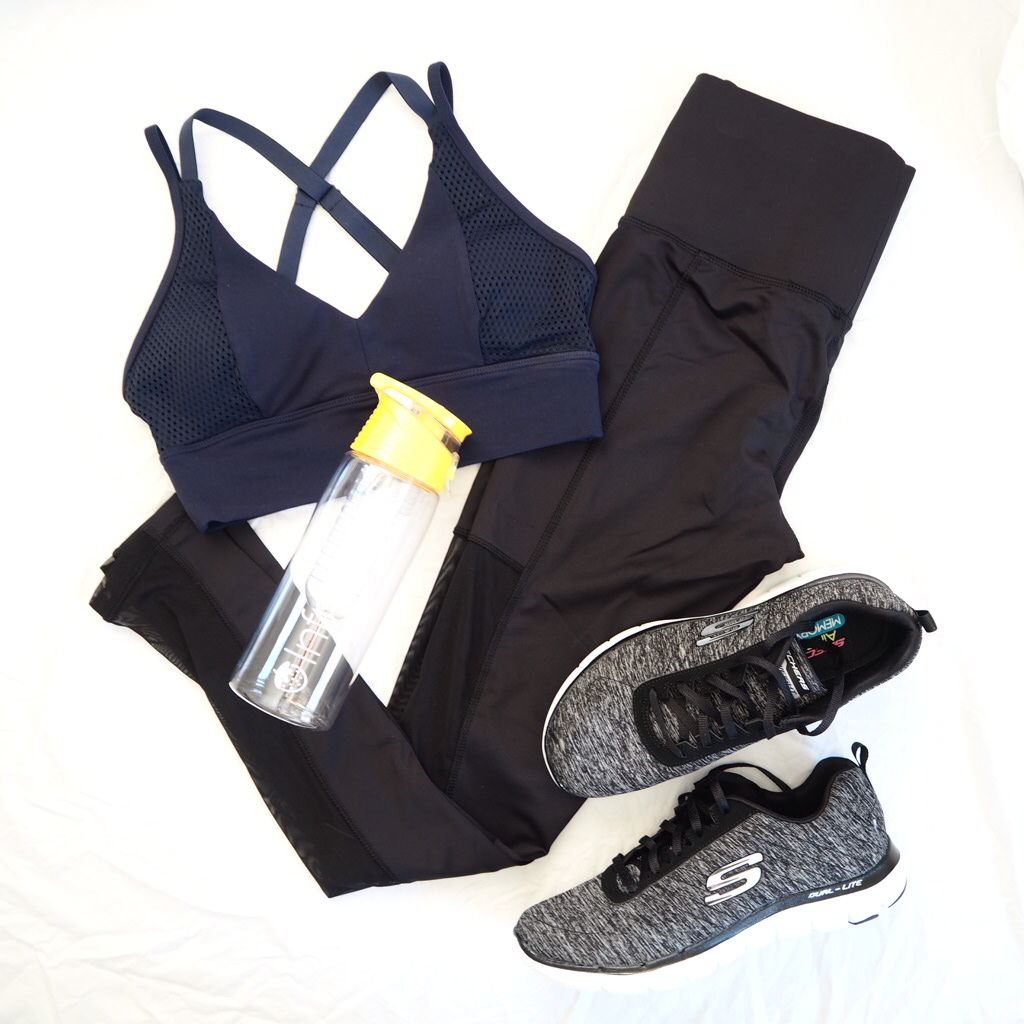 The only thing I haven’t covered now is swimming. That wasn’t a massive goal anyway; more of a way to keep it on my radar and I still have a little time to hit the pool. I’ll be looking to make sure I still feel comfortable now in the water, practice my drills to work on front crawl and then work on building up my endurance in order to create some more specific swimming related goals in the year.

What have you been focusing for January?! …have you had to be flexible with the goals you set yourself?!

How To Layer For Running in Cold Weather

5 Lower Body Exercises You Can Do At Home