Just over a week ago, I accomplished something that had been on my radar for more than twelve months. I hopped on my bike on Sunday 25th September and completed L’Etape London by Tour de France, the short route (49 miles). 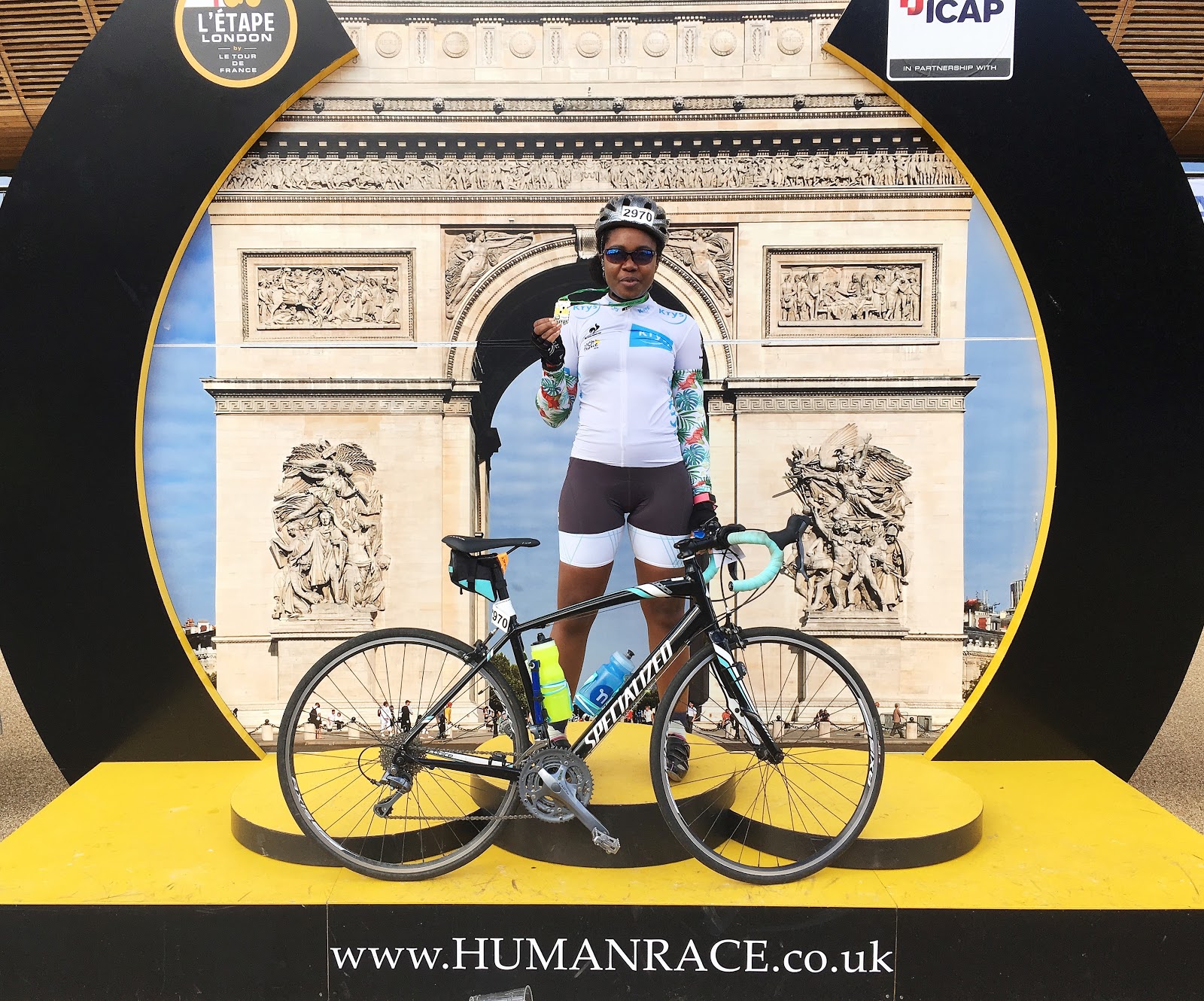 To some, 49 miles might not be a lot. But for me, it was the longest distance I’ve ever ridden. With only some basic training under my belt (6 weeks on the turbo and a few weekend long rides) my only goal was to finish the event.

In the month before the event though, a couple long rides got cancelled and I subconsciously started to feel anxious. I acknowledged this and just tried to ensure I ate well and slept plenty in the run up to event day.

On the day, I had a 430am alarm as I was lucky enough to have been invited to breakfast with Chris Froome before the event. It was at this point I was grateful for the night tube as without it I couldn’t have been in Stratford so early. The early start was perfect as it meant I was up early enough to eat a decent breakfast and really get myself sorted without having to worry or panic. I ate everything, really slowly (croissants, bacon sarnie, fruit, cereal bars) and then got changed ready for my 8:45am start time.

The start line was located on the road track at the Olympic Velopark and was out of sight to those in the race village. I really wanted to see what the start looked like to help settle my nerves and had to persuade the stewards to let me go through early so I could just have a look before returning to the race village. I think it would definitely add some more atmosphere to the event if everyone could see the start (and finish line) from the entire village.

At this point it started to drizzle and I did start to worry I’d made a serious omission to my kit not thinking to bring a rain jacket but I did have my arm warmers which stayed firmly in place for the entire ride! Our start was a little delayed (I can’t remember why right now) but before I knew it we were up and over a little hill on the road track before making our way out of the velodrome into Stratford and beyond.

My main concerns for this event stemmed from the fact that I was riding alone and I also am not that confident about fixing punctures or anything else that could go wrong with the bike. I also know that when the ground is wet, punctures are more likely. I was worried that if I got a puncture, it wouldn’t be easy to get help and potentially could mean me not completing the race or if I did complete, it’d be a really shocking time. But thankfully, the cycling gods were on my side and I was lucky enough to complete the event with no issues.

The route took us out through East London via roads that I’ve really only ever driven on. Another thing I wasn’t aware of (but luckily confident about) was that the roads were still open so we were bound to the rules of the roads which included stopping at traffic lights. For any less experienced cyclist this could be a serious issue to consider when deciding whether or not to enter the event. I understand there probably aren’t enough people taking part to close roads but maybe there should be a little more guidance in preparation?

Before I knew it, we were in Essex and literally just minutes from my house. I also knew that being in Essex meant this is where the hills would come in. For the first time in a long time I’d actually gone through every detail of the event including the route so I could note where the points of elevation were (mainly in the middle and start of the return to East London). I was also pleased to realise that I had cycled part of the route earlier this year (hello Toots Hill) so I felt more confident tackling it again with a tiny bit more experience under my belt.

The feed station was situated at the half way mark (salty boiled new potatoes, wow!) with bottles of water to refill my bottles on the bike and other supplies (energy gels, jelly babies etc). I also used this stop as a toilet break and although there were so few women in the event there was still a queue for the ladies (this must be some sort of phenomenon!). It was my first and only planned stop so I didn’t stress too much about how long it was all taking and as soon as I felt I’d eaten enough I hopped back on my bike.

When I left the feed station though, I almost didn’t know which direction to go! Left, or right?! But now I was back on the road with just half of the mileage complete…

The Benefits of Compression Wear with #SKINSorNOTHING

Excited to share that I have been nominated and se