The day finally arrived. The day of my third Half Marathon for 2015. A day I actually hadn’t trained for.

I started this race knowing I wasn’t going to run a PB. I couldn’t guarantee I wasn’t going run a personal worst either but either way I actually didn’t mind. I decided that this month would be all about the experience. It’d be the second time I ran this route but the first time I’d take the time to soak it all in and enjoy it. The Start: As usual the start was arranged by times. I think we ended up starting with the 1:45 pace group to just get away and start strong.

The Route: The route was highly anticipated; changes had been made following feedback from 2014 about the section going through the Olympic Park. I still don’t know this part of East London very well but places were recognisable from last year and the route was pretty flat which was a relief. 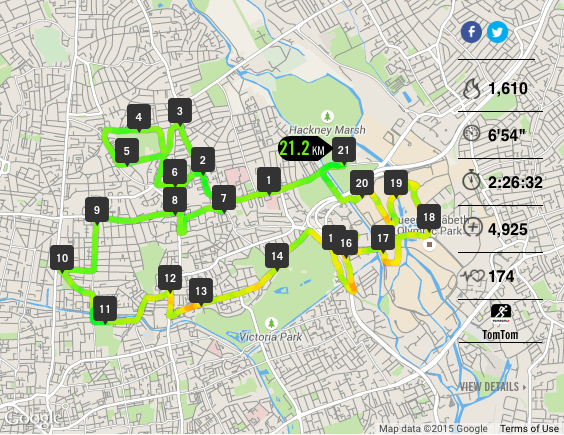 I saw my first marshalling buddy at around Mile 3 – Becca – which was a great boost already! I overheard someone running saying how it’s like a game of Where’s Wally! I used to love that game and I’m pretty good at spotting people in crowds! At this point I was still running with Bethan; our pace was around the 6min/km mark which I knew already was too fast for me, today. It was hotter than expected – the same issue that plagued the 2014 race – but this year I hadn’t dressed for the heat!

I ran with Bethan up to the half way point then I had to give in and go slower. I also had to take off my long sleeved top which was too warm for the day and length of time I’d be running. Huge shout out to all the marshals who were encouraging the runners along the route! Thanks especially to more marshalling buddies, Nkeiruka, Nneka and Ogechi! 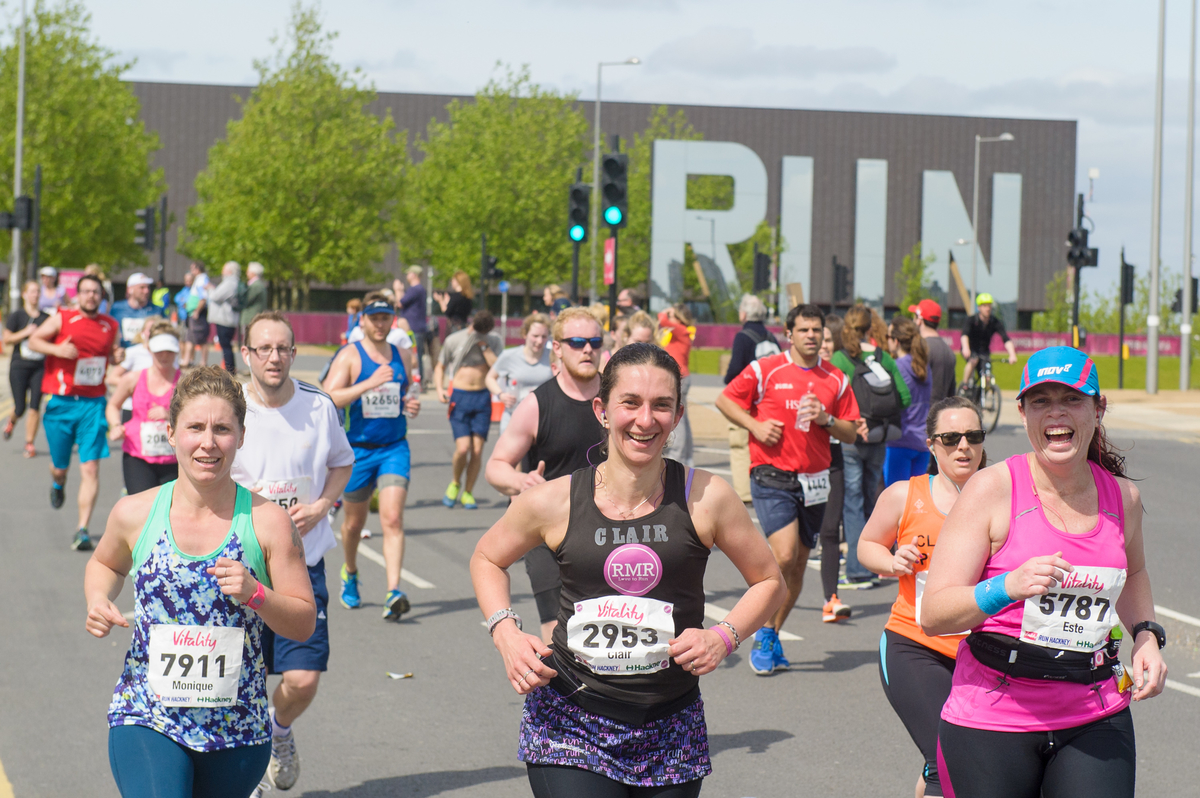 The Olympic Park section of the route (approx mile 10.5 – 12.5) was such a vast improvement on last year.  After running past the enthusiasm, cheers and support created by Run Dem Crew at mile 10 it was a pleasure to enter the Olympic Park. We ran through more of the park this year, it was flatter and there was no soul destroying moment when you passed the 12 mile marker when you were just at mile 10 going uphill. The last 0.5 miles were the same as last year so I knew what to expect.

The Crowd & Atmosphere: The streets were lined with people and local residents were out in force cheering all the runners on! It was so nice to see everyone getting involved! The addition of names to race bibs was a great idea – it meant even strangers could, and did, shout out to you with their support!

The runners themselves were a mixed bag. I passed friends chatting and catching up, friends talking about pace and then couples arguing about how encouraging they were or weren’t being. Maybe this is how every race is, I’ve just never noticed! 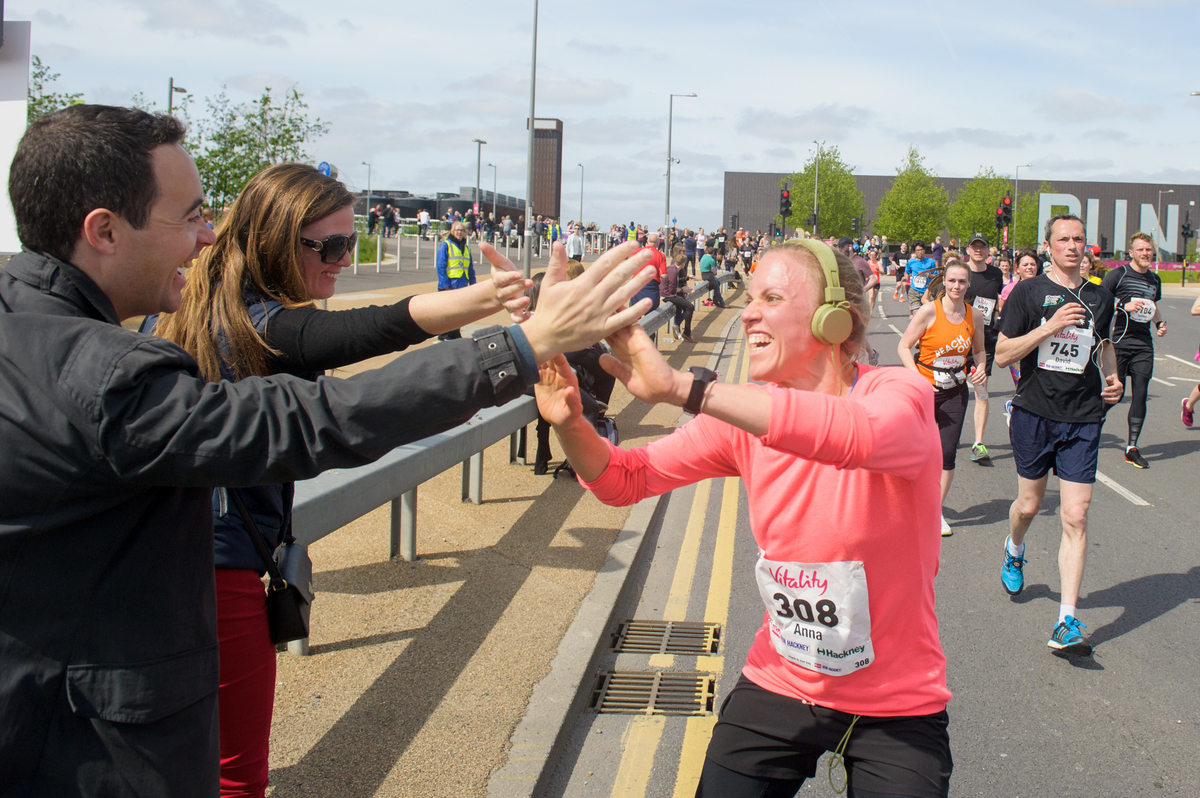 With multiple bands along the route too, I took the opportunity to walk past most of them so I could enjoy what they were doing for just a few seconds longer.

The Drinks: There were plenty of drink stations along the course and lucky for me they all came at the point when I really needed a drink. There was one station however, that just had Lucozade so if you wanted water you had to run another 2 miles. I’m all for Lucozade, but a mixed station would’ve been more suitable. After the Lucozade station, I felt like I was running on a nightclub floor! It was soooooo sticky from the sugar in the drinks!

The Loo Situation: Plenty were at the start line and I didn’t have to queue before I started the race (this was just 10 minutes before the 9am start time!). I didn’t need the loo during the race (I never do, but I do think on this occasion I was dehydrated) so I don’t know if there were queues on the course.

The Finish: The crowds were amazing as I turned the corner heading to the finish. I took a few moments to have a walk, take it in and catch my breath just before the home straight so I could give my all to my sprint finish!

It did then take me a long time to get my bag back. My bag drop seemed to be the only one with a ridiculous queue and whilst other bag volunteers stood there doing nothing we just waited…

The Medal: After a short walk through the finishers funnel, we were presented with our medals, a goody bag, banana, water and t-shirt! Hooray! A t-shirt this year! …oh and the Half Marathon medal is bigger than the 5km medal! It was great to see Run Hackney had taken more feedback on board and put the date of the race and distance on the medal 🙂 It’s the little things! 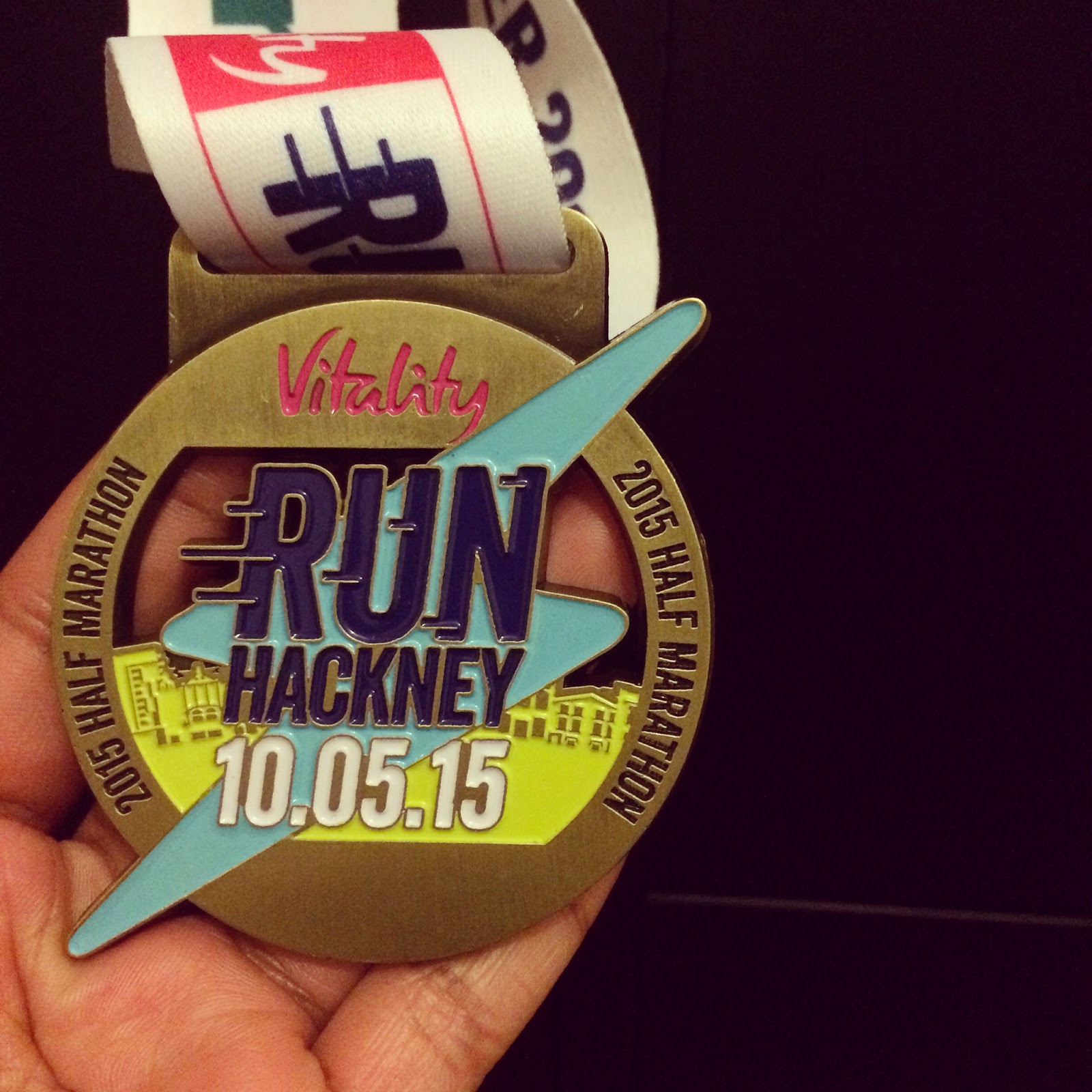 The Statistics: Here are my race deets from the website! 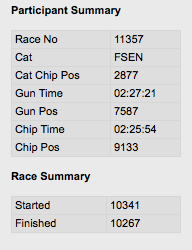 p.s And Thanks to Vitality Run Hackney for my place. All opinions are my own 🙂 some photos though are not – credit to Anthony Upton via Run Hackney

Those interested in registering for the 2016 Vitality Run Hackney can register their interest at www.runhackney.com .