I’ve participated in a fair few races – from free Parkruns and small club 10ks, to Nike sponsored half marathons and a world marathon major – but the North London Half Marathon was the first time I’ve volunteered at a running event. I signed up to volunteer at North London when I  realised I wouldn’t be able to train for it, and thought it might be interesting to share my experience for Elle’s readers.

On the morning there was also a ‘schools challenge’- where aprox 850 children ran their final mile of a half marathon challenge.

I was away for most of February so missed the volunteer briefing sessions. However a comprehensive information pack containing a description of my role, and general briefing notes was sent out well before race day. Although I had initially been hoping to be out on course (especially after reading Laura (Life Laura London) and Becca’s (from snickers to marathon) accounts of course marshalling at Hackney last year), I was allocated as a ‘Rewards Marshall’, and became quite excited at the prospect of handing out the medals!

My alarm went off at 0520 – a very early start in order to get to the stadium for 0715. Luckily I was able to get a bus most of the way, and after a slightly bewildered walk along the M1 I found the stadium. 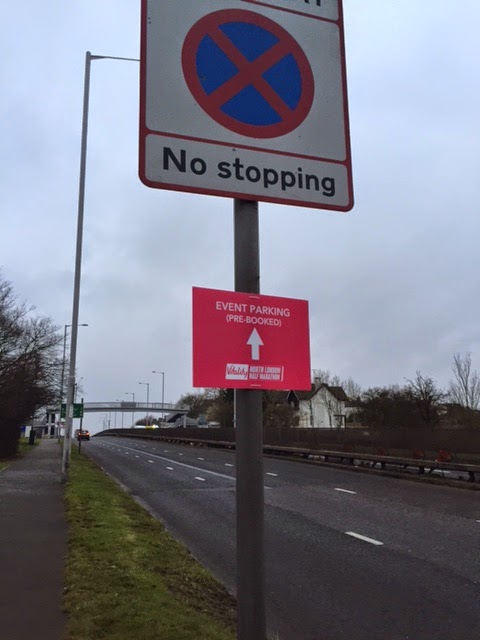 I signed in, grabbed a bacon roll and bright orange volunteers t-shirt. The rewards team leader (employed by GO2 events) gathered the volunteer team together and took us out to the rewards area – which was along the track where runners would be directed to after crossing the line. She went through the main duties again (setting up the rewards items for both the schools challenge and half marathon, handing out rewards to runners, keeping runners moving through the area, clearing up rubbish and packing up at the end of the race), and warned us that this area is one of the main places for medical emergencies at a race, so what to do if anyone did become ill. We were of course encouraged to congratulate runners as they came through the finishing chute as well!

“After opening pack upon pack of water and Lucozade (in the end digging out my keys to make this task easier), I will never take a drink for granted at a race again.”

We got to work setting up the rewards- so that runners would pass through areas for water, medals, goody bags, Lucozade and bananas. After opening pack upon pack of water and Lucozade (in the end digging out my keys to make this task easier), I will never take a drink for granted at a race again. 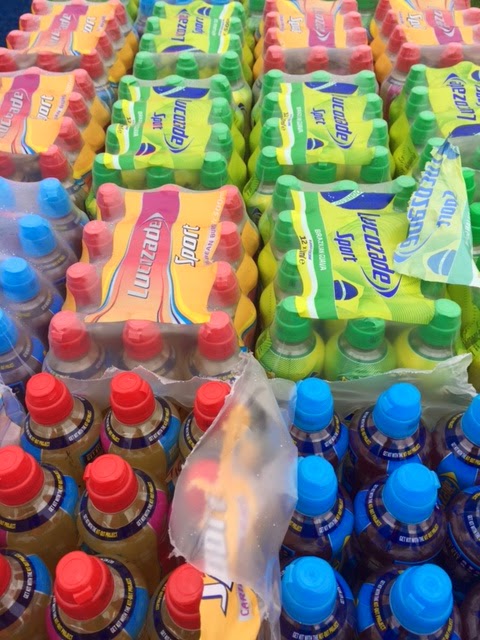 The race was due to start at 0930, and at about 0915 a group of us were asked to run around the race village encouraging runners to move to the start line, which was a 10 minute walk away. Although some people were still in baggage and toilet queues, I was surprised at how many runners were standing around chatting or casually arriving so close to race start time, although really felt for those that were running through the stadium, clearly having had problems getting to the race venue.

“However about 5 minutes before the leaders arrived we were asked to take the medals out of the bags, and hang them around each runner’s necks. Cue slightly panicked ripping open of bags”

Once Mo Farah had set the half marathoners on their way, it was time for the Schools Challenge. One of my highlights from the day was chatting to some of the kids about why they liked running, and seeing how excited they were to be anywhere near Mo. The children started and finished their mile in the stadium and over the same finish line, so came through to collect their medals and goody bags. It was then time to make sure we had everything ready for the half marathoners – as were warned that the leaders were not that far off.  I was on the medal table and we had initially been told to give out the medals in the little plastic bags they were packed in. I didn’t love the idea of this as have never been given a medal like that at a race (and always wear my medal with pride), but appreciated it would be much more time efficient.  However about 5 minutes before the leaders arrived we were asked to take the medals out of the bags, and hang them around each runner’s necks. Cue slightly panicked ripping open of bags – I have to admit at this point I did think it was going to be a disaster but thanks to the immense hard work of my co-volunteers we did not run out of opened medals! 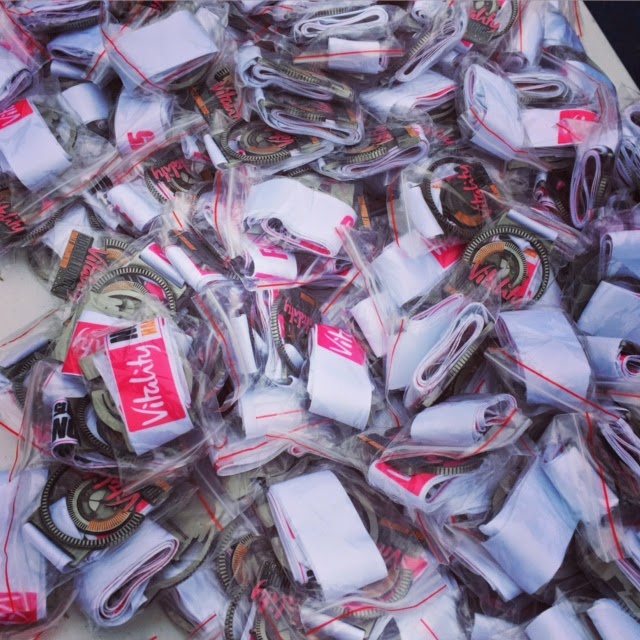 Things started off nice and slowly for us with the leaders and speedy club runners trickling through – Becs (speedybecsruns) was one of the first runners I saw (I believe she finished 12th lady!). Once the ‘masses’ started arriving it was a pretty relentless but brilliant task of loading my arm up with medals and handing them out as runners came through. For each runner there was a super quick assessment of ‘do they want me to hand it to them?’, ‘do they want it to be hung around their neck?’, ‘do they even want this medal?’, and for one or two- ‘are they about to vomit and/or collapse?’.

I could not tell you the amount of times I said ‘well done’ or ‘congratulations’, but I meant it every single time. What made this long and tiring day so worthwhile, was seeing the elation and achievement in people’s faces and being able to jump up and down with them and tell them they had done incredibly. From people that had given everything for a PB, to the people that had completed their first half and couldn’t believe they had done it. There were a few runners who snatched their medals without a smile or thank you, but on the whole people seemed pretty chuffed. I was also constantly on the lookout for the 15 or so runners I knew in the event- and was so pleased to see all but 2 of them- including Elle!

After the initial rush subsided, a handful of volunteers were moved over to help with the baggage area which was apparently pretty busy. The rest of us closed the finishing area down to one chute, so that runners could still come through but we could also start tidying up. My one main criticism of the event was how much packaging and rubbish there was, and I am not sure how much was recycled.

Our team leader got word over her radio when the last runner was coming in, and we all got together to clap her through the finish line. I was slightly emotional watching her come in just ahead of the amazing sweeper cyclists – but then I am the girl who stands in the rain for hours cheering on the 6+ hour runners at the London marathon every year. There was actually one other runner who had somehow ended up behind the cyclists – and as soon as we realised, he also got a big cheer as he crossed the finish line. 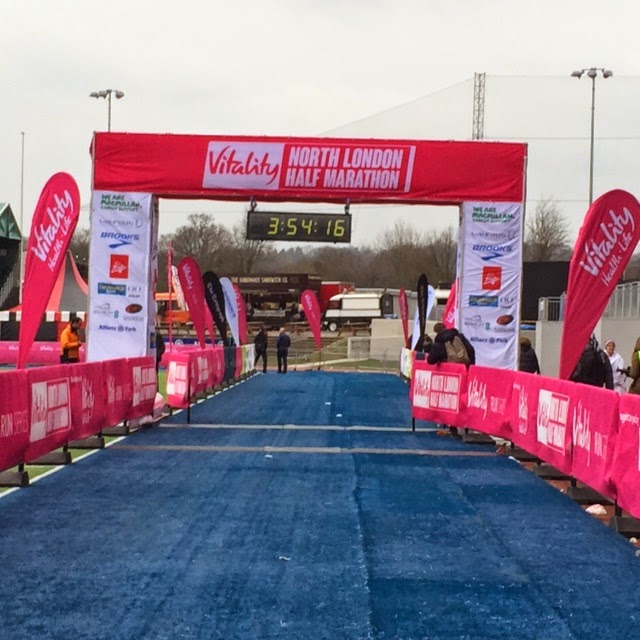 Once all the runners were through, we volunteers had a quick photo under the finish line, and finished collecting everything together.  I left the stadium at around 2pm – freezing cold and ready for a massive roast despite not having run the half!

“As a thank you for volunteering I have been offered free entry to next year’s event, so looks like I better get some hill training in!”

Overall I was really impressed with the race and am happy that the organisers are keen for feedback as they want to improve for next year if they can. Apart from difficulty getting to the location and the hilly course (both things runners could find out before signing up if they wanted to), the baggage seems to be the main thing I heard on the day which could be improved. As a thank you for volunteering I have been offered free entry to next year’s event, so looks like I better get some hill training in!

I would definitely recommend volunteering at a race to all runners- not only is it your chance to give something back, but gives a real insight into where your entry fee goes.

It will also remind you to ALWAYS SMILE AND THANK THE MARSHALLS!!