In less time than it takes me to travel into or across London, I found myself in Amsterdam. One of my favourite cities even though I’d only visited it the once. The purpose of my visit way back in 2014 was to explore the city at night, by foot. This time, I would get to do something I hadn’t done before… the opportunity to explore the city on two wheels, literally powered by Shimano.

The main reason I’d opted not to cycle in Amsterdam before was because it just looked so damn intimidating! There are countless numbers of cyclists, endless cycle paths and I dunno which direction I’m supposed to look when I cross the road never mind when on two wheels! What I do know from previous experience cycling in London though is that the best way to gain some confidence is to go out in a group…

The majority of my group for the day were Dutch, so I was in safe hands. And you know what I realised? Most cyclists in Amsterdam are just chilled. As I ambled my way along, no one got mad that I was going slow… they just overtook when they needed to. End of. Cyclists are separated from cars for 99% of the time (that I experienced) with dedicated cycle lanes and dedicated lights. It’s a good life.

What I Thought About The e-Bike

My wheels for the day were very Amsterdam-esque; a commuter bike decked out with e-Bike components from Shimano. Me being me, and also not feeling 100% on the day, I opted for the automatic, electronic gear shifting bike so all I’d have to think about was following the person ahead of me, navigating the streets and taking in the sights of Amsterdam!

The bike was super easy to use; all the controls were on the handlebar and on the bike computer so you could easily and quickly shift between modes. Eco for a little boost > Normal > through to High, the most supported mode > or Off. 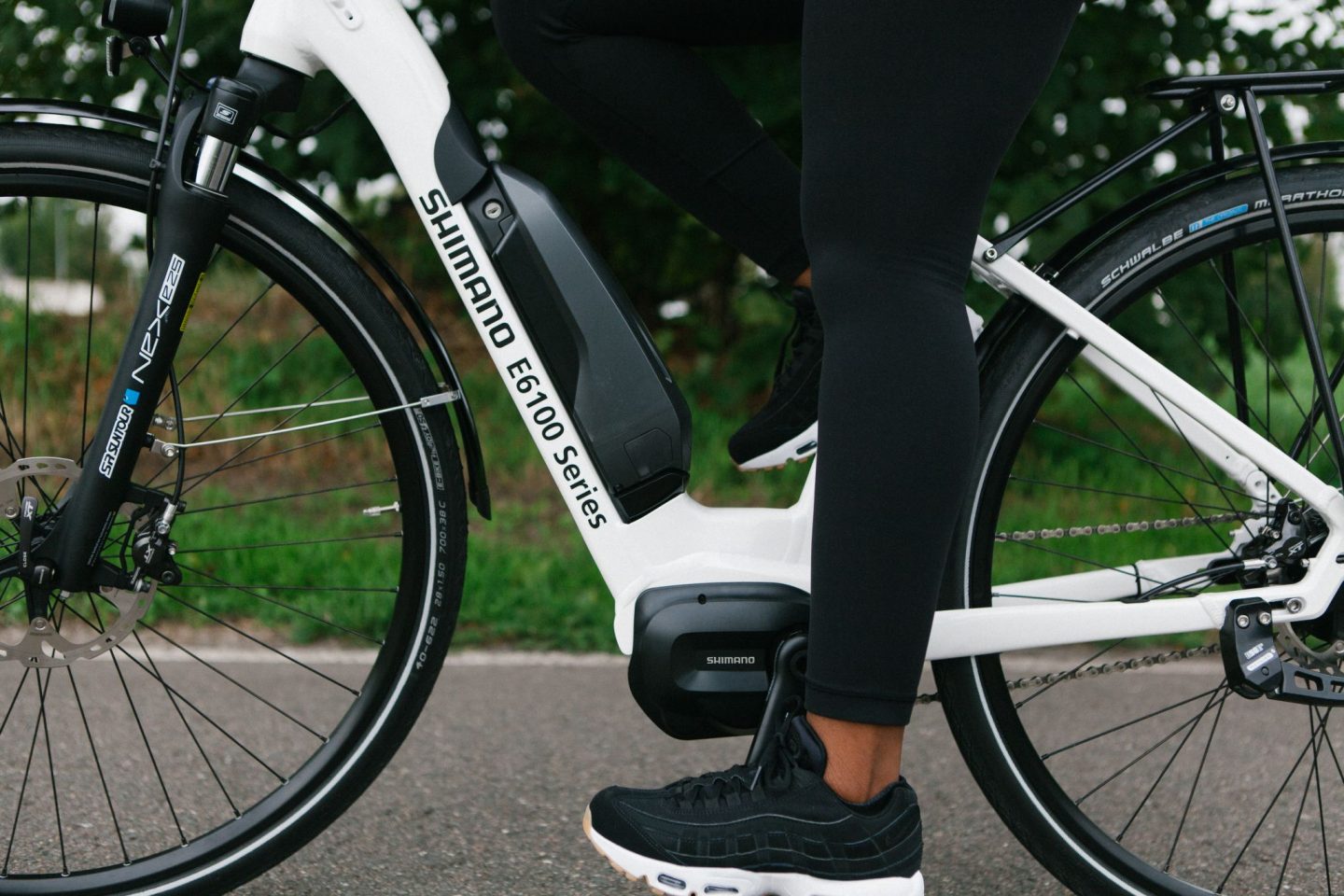 Is an e-Bike Cheating Then?!

For most of the ride, I was so chilled I’m surprised the bike didn’t start going backwards. But when we made a stop at Sportpark Sloten we got a chance to really test out the speed on the bikes. Sportpark Sloten is a large sports complex which is surrounded by a 2.5km asphalt cycling circuit (as pictured above). Little did I know though that the bike only supports you up to speeds of 25kmph… so once I reached 45kmph (on a downhill, lol) it was just me and the bike. And it was damn hard work especially as I was fully expecting the bike to keep working! Needless to say I swiftly came back down to under the 25kmph limit to enjoy the full capacity of the bike again and finish the loop.

Look, I was ready and waiting for someone to comment on my instagram pictures and ask why I wasn’t wearing a helmet …but no one has yet. But I know it’s not because they didn’t notice… it’s just prob that they don’t wanna be *that* person lol …cos I did get asked in conversation (in real life). To be honest, I went along with the full expectations of wearing one but it’s not part of the culture. Wearing a helmet isn’t even required by law in the UK… but yes, I wear one 99.9% of the time (the exception being when I cycle to Parkrun which is 1 mile away and I don’t have somewhere to leave my helmet). As I mentioned earlier, the infrastructure in Amsterdam is made for cyclists… helmets don’t stop accidents… they protect you when an accident occurs. A good infrastructure is the groundwork needed for increased safety on bikes.

Highlights of the Day

Now we’ve had the helmet talk, let me run through some highlights from the day. Number 1 had to be cycling through… t h r o u g h …the Rijksmuseum (see second picture from top)… cycling down an escalator into the entrance of a bike parking facility (I screamed! lol), checking out the Olympisch Station again (it’s where my race started from back in 2014) and cycling through Vondelpark (the Central Park of Amsterdam).

Cycling in Amsterdam is definitely gonna go down in history as one of my favourite trips even though it was short and sweet. The hotel I stayed in offered free bike hire (check out The Manor Amsterdam on booking dot com – use this link to get £15 off any booking on booking dot com*) which I would defo take up on my next visit…

Who’s keen to have a go on an e-Bike then?! …and where would you take it?!

The Bare Essentials For Road Cycling