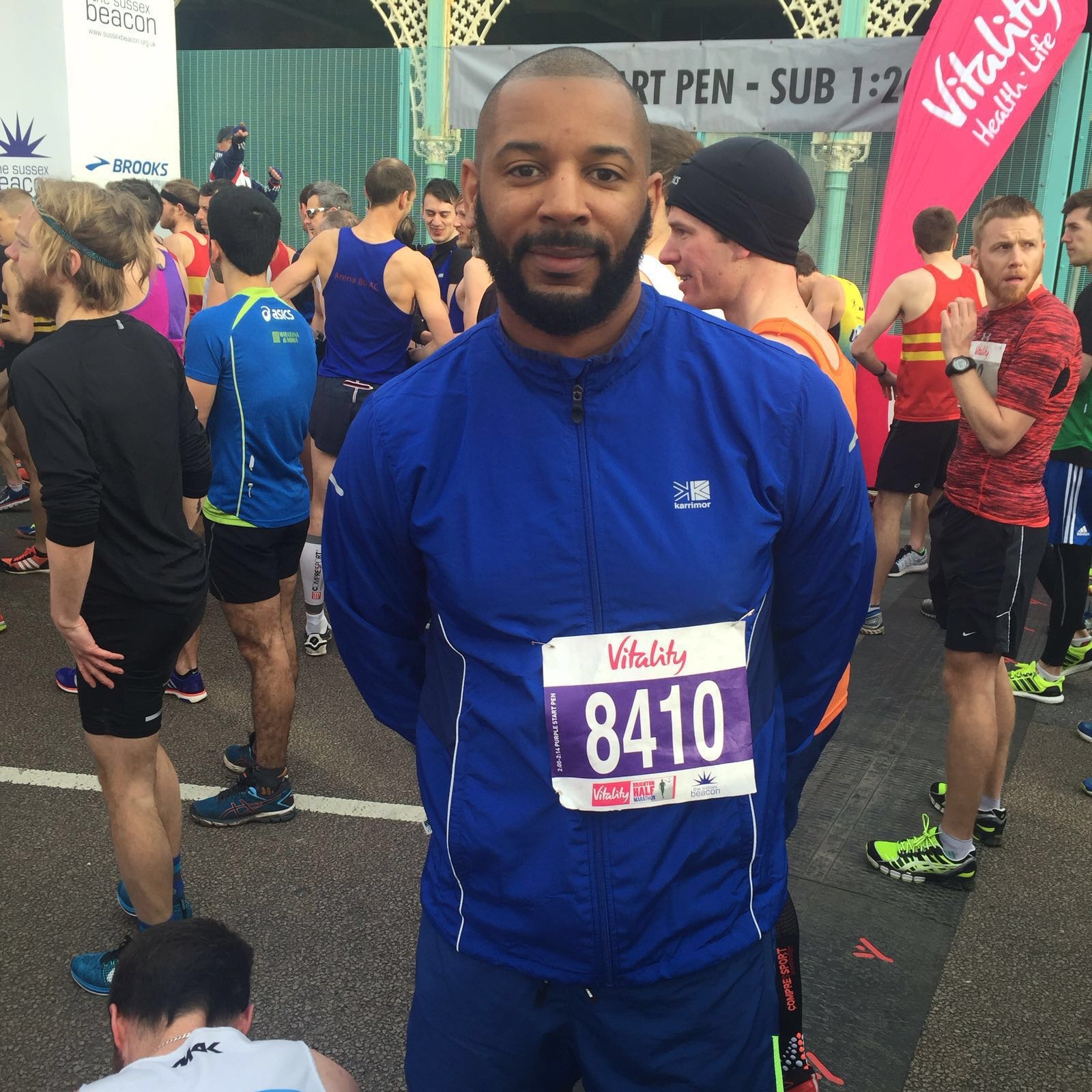 On The Run: Shaun Holder

It’s now just 6 weeks until my first marathon!
I decided to choose Brighton for my baptism of fire having lived there for 7 years (plus I couldn’t get into London lol). It’s also probably why I love this city as I’ve had some great memories there and I’m already halfway into my training plan, averaging 30 miles a week.

My daily commute is a 3 hour round trip so to break up the monotonous routine, I run 12 miles from the office to Liverpool Street on Thursdays.

Training was going well until a poor half marathon at Hampton Court the weekend before last which really knocked my confidence. I finished in 1:46 which was respectable but nowhere near as fast as I’d hoped. After 8 miles my legs just seized up and I practically crawled to the finish line.
I still felt I needed another race for a boost to get me back on track.

On Friday, I overheard a workmate discussing his plans for the weekend. My ears pricked up when the words “Running Club” and “half marathon” were mentioned. Being curious I struck up a convo only to find out he was running the Brighton Half on Sunday 28th February.

I thought to myself “why didn’t I book this event?” It would’ve been a great excuse for a “recce” and to get familiar with the route.

Well, as fate would have it, sat on my train home, scrolling through Facebook I notice a friend’s post on my newsfeed: “Brighton Half Marathon place up for grabs this weekend”.

I messaged straight away, luckily nobody had contacted Elle so the place was mine.
I was now running my second half marathon in 7 days, determined to banish the horrors of Hampton Court.

Race Day: Sunday morning, 6:15am alarm goes off (Get On Up by James Brown always gets me pumped on race day); the standard porridge with a banana and protein bar are consumed for breakfast. Five minutes on the foam roller then final bag check (protein gel, iPhone arm band and race number) before heading down the M25 towards the coast. 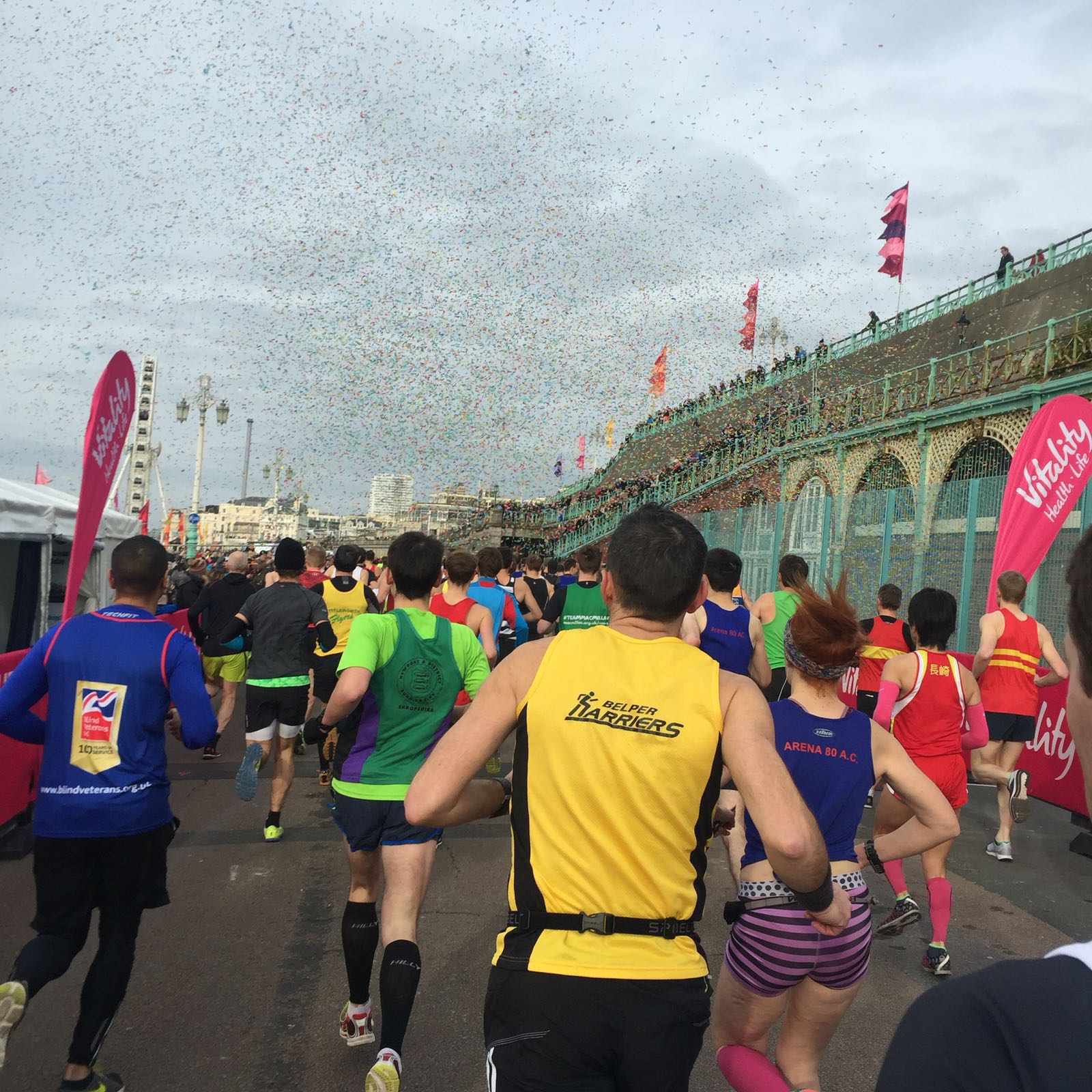 The Start: My target time was 1:45, I start making my way to the colour coded pens. Unfortunately, the race was about to start and I’m right at the front ….with all the elite runners!
I psych myself up with heel kicks and lunges (a vain attempt to look professional) before the  klaxon sounds and I’m crossing the start line! I hit start on my Suunto watch (usually I run with Nike + app but my training partner has got me using Strava)and away we go.

Confetti and cheers gave it a real ‘big event’ feeling.

The Race:
Now if you’re anything like me there’s nothing more demoralising than being overtaken in a race. The only exception to this rule is when you’re trapped at the start with sub 1:20 athletes.

The route headed past the Royal Pavillon and back round past the Brighton Pier up towards the Marina. My goal was to keep a consistent pace of around 8:40 per mile instead of getting excited and pushing too hard early on. My legs felt surprisingly limber (maybe that Epsom salt bath the night before did the trick) and I was comfortable.

Towards the 3 mile mark there was a band playing The Addams Family theme song and runners showed their gratitude by clapping along. Then came the incline towards the Marina and a loop back past the pier. A few gusts of wind but the weather conditions were pretty good, the sun was out too. 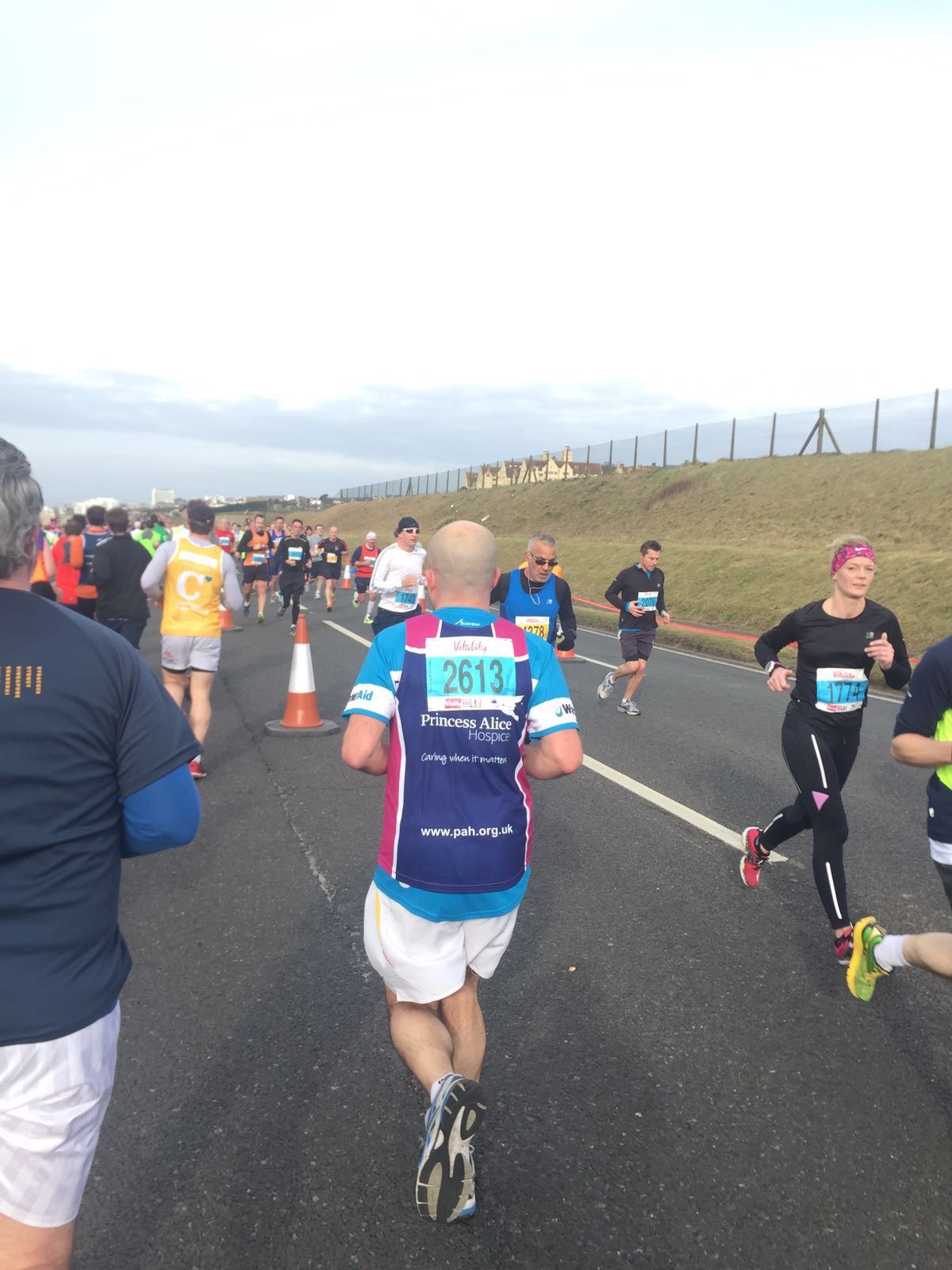 This was the moment you start to see the elites heading back; a few groans and sighs were let out from other runners at the realisation of how far ahead they were.

Mile 6 and my legs are still in good shape, I decided to push harder as the course was pretty flat. Heading along the seafront up to Hove Lawns, the roads were full of supporters which was a massive help.
Elite runners had started to make their way back, everyone clapped at their achievement.

When you know a particular route it mentally prepares you for what’s ahead. I always try and pick out other runners to overtake but today was all about staying disciplined. If I could get to mile 9 and my legs were in good shape, I promised myself I’d push hard until the finish line.

Drink stations were really well organised and there wasn’t the frustrating wait like I’ve had at over events. You’re given the choice between water and lucozade (my preferred choice having a sweet tooth). The loop back to the pier came on mile 10; in past races, this is usually where fatigue kicks in but there was something different about today. The atmosphere was electric, people shouting words of encouragement “you’re almost there guys, keep going” One girl cheekily screamed “sprint to the finish” …“Easier said than done love” I shouted back.
Bands were playing and sound systems blaring out up tempo music. A quick check on my watch ‘average pace 7:55’ with just 3 miles to go!

This is where my competitive side came out, picking people to overtake just like I do at Park Run every Saturday morning. A fellow runner who I’d kept up with since mile 8 started to edge past me, I didn’t take the bait straight away. As long as I could keep her in sight I was OK.

“It was at this point I noticed a familiar face in the spectator crowd, an old workmate I’d not seen in years.
The motivation you get when someone calls you out personally during a race can’t be explained until you’ve experienced it. “

Mile 12 Marker: The crowd support was immense as we approached the final stretch. I always like to finish a race strong and my strategy was going well so now was the time to give it everything I had. Back straight, head up and knees up, using my arms to keep momentum. My ‘rival’ was still just ahead of me – making an attempt to pass was snuffed out immediately; she started to pull away.

The pier was now in plain sight, I decided to keep pace alongside and slowly edge past, luckily for me she didn’t respond! The road narrowed slightly which made it hard to overtake but I wasn’t complaining (a welcome few seconds of rest after all) then the big kick to THE FINISH LINE!!! 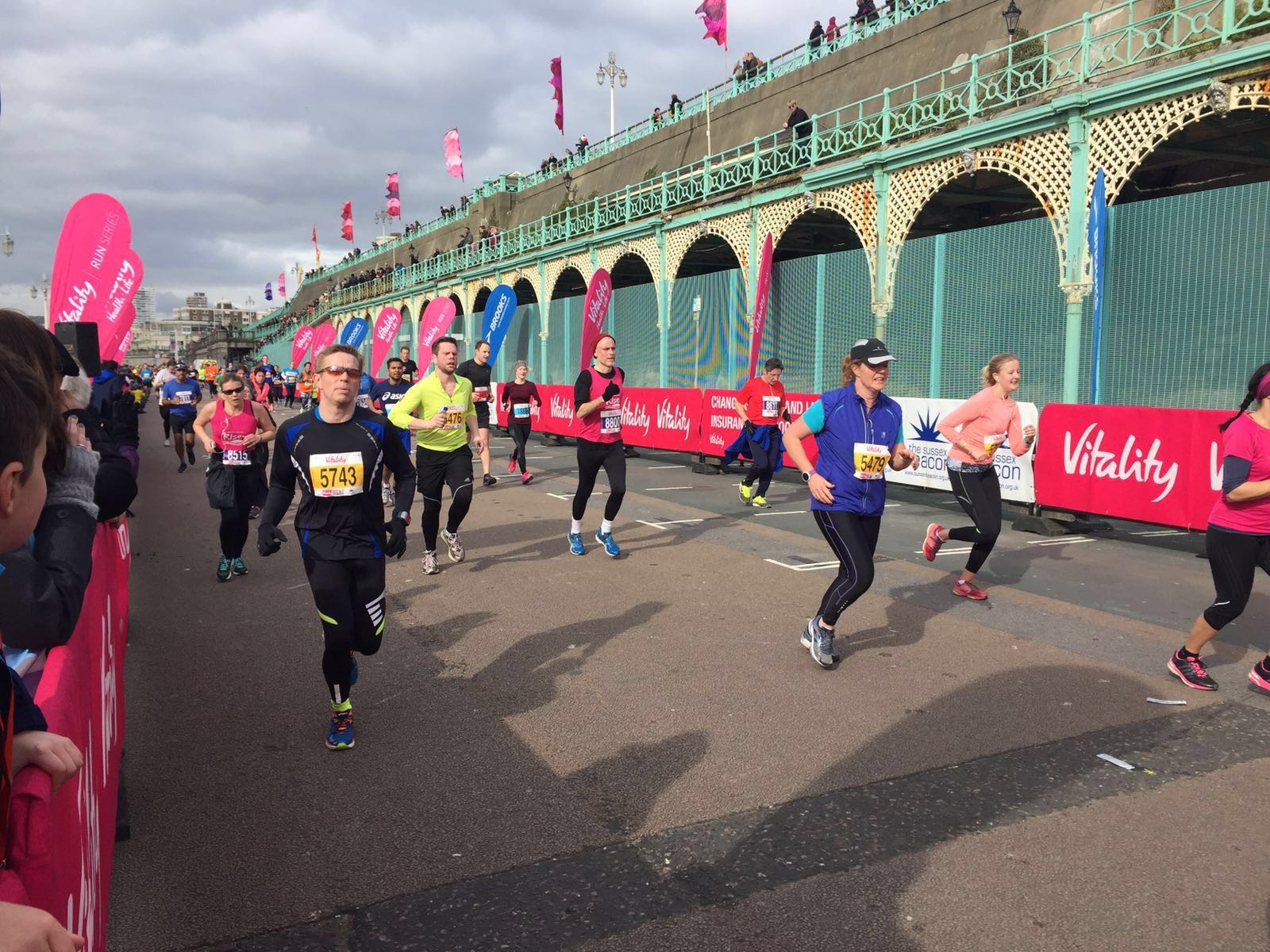 Finish: The stroll towards the post race drinks section gave runners a chance to stretch off and didn’t feel congested. A generous goody bag of healthy snacks, Lucozade bottles, t shirts and of course the huge medal awaited.

This is probably one of the most impressive
medals I’ve earned which gives a real sense of achievement. It’s pretty weighty too. 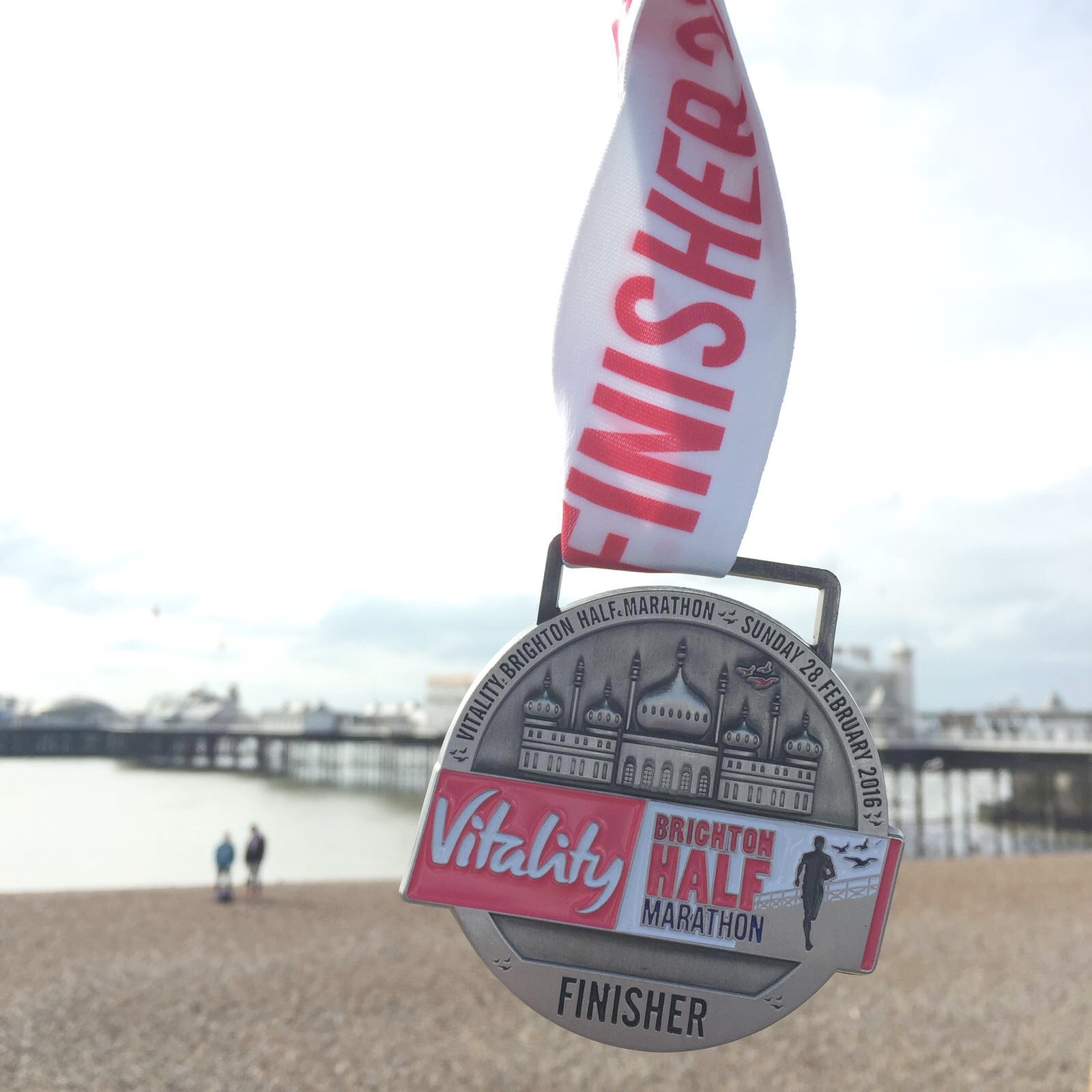 My average pace was 7:55; I’ve not ran this consistently for well over a year now so this gave me the confidence I needed after the Hampton Court Half. 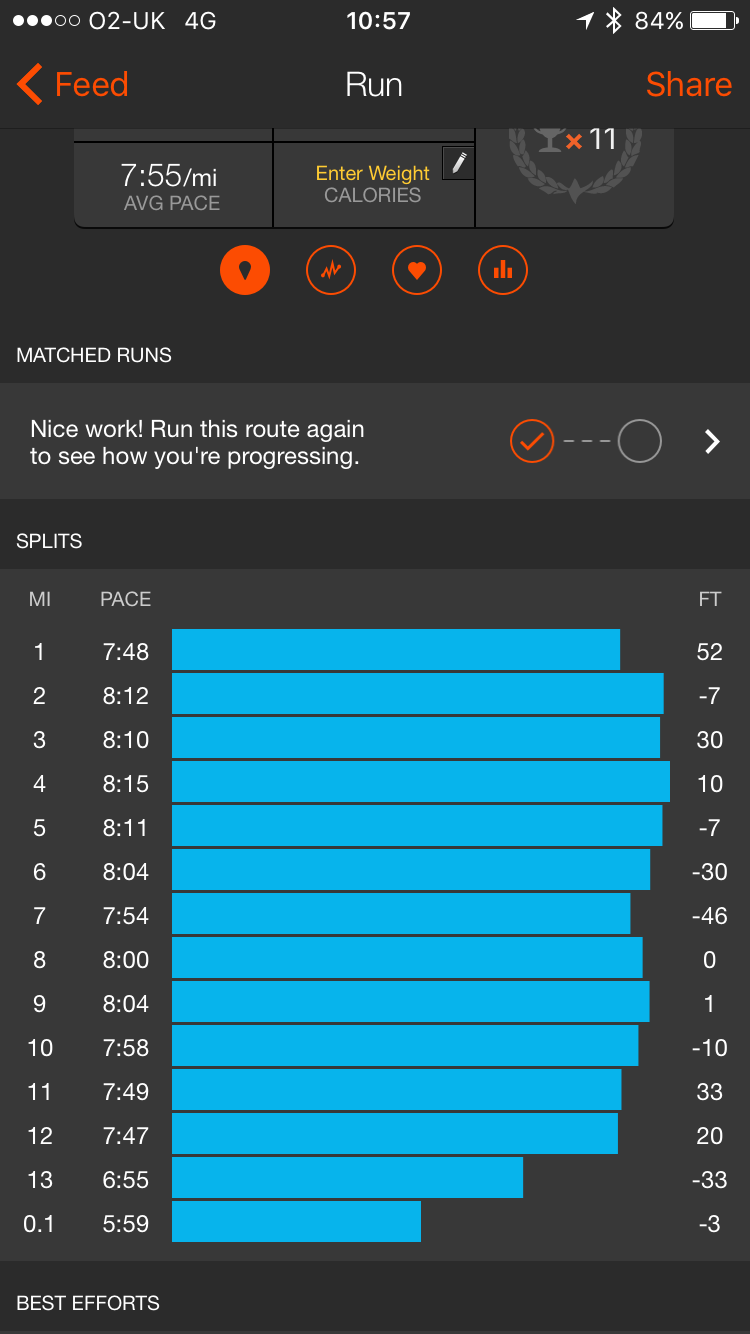 This is by far one of the best organised events I’ve been a part of. Everything from the support, drink stations and atmosphere was spot on. If this race is anything to go by, I can’t wait to come back on April 17th for the Brighton Marathon!!

Are you currently training for a marathon?! How do you mentally and physically prepare?!

p.s And Thanks to Vitality Brighton for the place in this years race! It was amazing for me to be back in Brighton after graduating from the University of Brighton nearly 10 years ago… and the same goes for Shaun! All opinions are our own 🙂 all photo’s are Shaun’s 😉

Trading The City For The Commute with Brompton